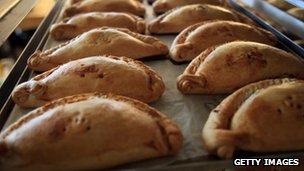 Animals intended for halal meat are traditionally slaughtered by hand in accordance with Islamic law
The Ministry of Justice is to suspend a firm supplying meat to prisons after tests found that it may have provided pies and pasties described as Halal – but with traces of pork DNA.

The Food Standards Agency (FSA) said the “local authority” involved was investigating, while the MoJ said the products have been withdrawn.

Under Islamic law, Muslims are strictly forbidden to eat pork.

In a statement, Mr Wright said the Prison Service was investigating the incident “as a matter of urgency”.

He added: “This is an absolutely unacceptable situation and one which we regret greatly.

“Clearly this must be distressing for those affected and they can be reassured we are doing everything we can to resolve the situation.”

The MoJ said it commissioned tests after the “recent high profile incidents” in which beefburgers sold by some supermarket chains were found to contain horsemeat.

It said the results of the tests, undertaken by an independent agency, became known on Thursday.

A spokesman said: “All prisons have been informed about this very regrettable incident and we reported this issue to the Food Standards Agency immediately.

“We are taking immediate steps to suspend the contract with the relevant sub-contractor.”

A spokeswoman for the FSA said it was “informed” that a number of meat pies and pasties supplied to UK prisons – labelled and served as Halal – could have contained traces of pork DNA.

She said: “The local authority is investigating how this contamination came about and whether these products have been distributed further across the UK.”

She added that the supplier and the local authority were based in the same area, but declined to say where.

Under Islamic law, the eating of pork is strictly prohibited for Muslims, as is the consumption of meat which has not been slaughtered in the correct way.

Halal meat is defined as meat slaughtered by hand and blessed by the person doing the killing, however some Muslims believe a mechanised form is also now acceptable.

Food and farming minister David Heath said people “have a right to expect that the food they are eating is correctly described”.

He insisted: “I have made it clear that I want an urgent meeting with major retailers and suppliers first thing next week to get to the bottom of this completely unacceptable situation.”

Juliet Lyon, director of the Prison Reform Trust charity, said: “This lapse will have offended and distressed high numbers of Muslim prisoners and their families so apologising, suspending the supplier and investigating the incident are the right steps for the Ministry of Justice to take.”

'Traces of pork DNA' found in Halal prison meat, Halal, pork, UK
You may also like